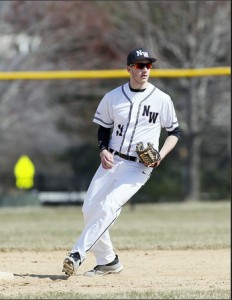 From Pre-School to High School

Ben began with the Germantown Athletic Club until age 7, then Ben tried out for an older “Select” baseball team, was accepted and held his own playing “up”.  Ben played either Select Baseball and/or tournament teams and is still doing so – always trying to become better by playing in situations with challenge – whether it’s to face better pitchers, or to face better batters.

Ben tried out for his high school team and has been on varsity as a starter since his sophomore year.

Ben picked up objects from an early “toddler” age and threw them – skipping rocks – anything that could be picked up and thrown, so baseball is a natural sport for him.  Ben is a well-liked kid who is easy to work with – and has been told time and time again that he is “coachable”, respectful, stable and reliable.

One noticeable trait is that it takes a lot to get to Ben and show emotion.  While pitching, he has complete focus,  “Chatter” is ignored and shut out. However, as laid back as Ben is, he drives to action as he dives for, reaches for, or anything else he needs to do to make a play.  He knows what’s going on around him and adjusts for it as needed.